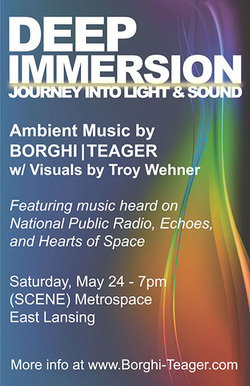 MAY 24TH AT (SCENE) METROSPACE

BORGHI | TEAGER is comprised of ambient guitarist Matt Borghi and saxophonist Michael Teager. The music of BORGHI | TEAGER has been featured on National Public Radio, Echoes with John Diliberto and Music from the Hearts of Space. Their debut release, Convocation, made many “Best of” lists at the end of 2013 and received critical acclaim from fans and media alike.

Matt Borghi and Michael Teager are available for interviews.