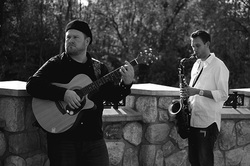 Matt Borghi (guitars, effects) and Michael Teager (saxophones, flute) are a recording and live performance duo focusing on improvised ambient (aka "jambient") music. They combine guitars, winds, and electronics to make each performance a unique experience. Performing regularly in the Midwest, their recordings receive airplay in North America, Australia, Europe, and online. Borghi & Teager have been featured on Hearts of Space, Echoes, Star's End, Ultima Thule, and more.


History:
In Michigan in late 2008, about the same time that the Big Three automotive suppliers were on the skids and two of them would later declare bankruptcy, two Michigan musicians were meeting in Lansing, the capital of Michigan, and the home of the recently defunct General Motors’ brand Oldsmobile, for the first time.

Matt Borghi and Michael Teager didn’t think much of it. Two musicians meeting, as musicians so often do, to try and put together a band. Borghi, a veteran bedroom composer of ambient music had packed up his Brian Eno records and was trying his hand at a working band. That band wanted a saxophone player to fill out their tunes and Teager, a classically-trained saxophonist and graduate student at nearby Michigan State University was the only one who answered the Craig’s List ad.

The band didn’t last, but Borghi and Teager’s relationship would. Their relationship and musical endeavors have paralleled the ups and downs of Michigan, as the state has come through bankruptcy, record-unemployment, and a loss of population.

With Borghi and Teager’s brand of ambient space jazz they’ve come to symbolize the hope, optimism and hard-working spirit that pushes the state of Michigan to redefine itself. From shuttered venues and greatly diminished arts & cultural opportunities through the release of their critically-acclaimed 2013 release, Convocation, Borghi and Teager typify the American spirit.

Matt Borghi (Guitars, Electronics and Voice) and Michael Teager (Saxophones and Flute) are dedicated to creating honest and inspired music that’s rich with improvisation and ambient sound texture that’s always true to their exploration of music, creativity and friendship and in service of their live performances.

Borghi and Teager’s curiosity takes listeners on a triptych that’s inspired by jazz improvisation and ambient spacemusic where Coltrane’s A Love Supreme could be quoted inside a dense ambient micro-symphony that’s reminiscent of Brian Eno or Tangerine Dream. However, their eclectic work doesn’t stop there, because as professional musicians they’re just as likely to do an orbital rendition of the classic jazz standard Autumn Leaves or to drive towards an otherworldly Pink Floyd-esque jam in either case taking the listener on a journey into sound.

Unlike many in the ambient and space music genre, Borghi and Teager, first and foremost are focused on the experience of live performance. They look to take anything that they do in the recording studio to the stage with the same spontaneity and serendipity making every performance unique, but also familiar.